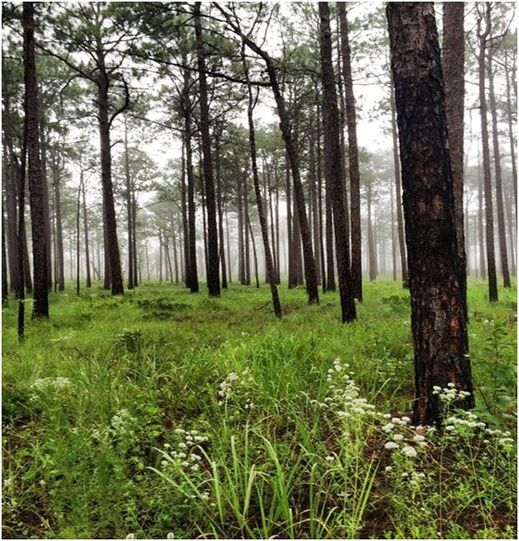 Photo by Caroline Krom.
The Venus Flytrap is native to very specific habitats in a small area of North and South Carolina, 100 miles inland from Wilmington, NC. It grows in longleaf pine ecosystems in two regions of the Carolinas – the Coastal Plain and the Sandhills. In the Coastal Plain, where it is more common, it grows in wet pine savannas on flat sites with moist soils. It can also be found in seasonally flooded depressions and may grow along the edges of open water. In the Sandhills, Venus Flytrap is limited to narrow, moist areas along small creeks between upland longleaf forests and evergreen shrub thickets, and also in seepages within longleaf pine uplands.​

Today Venus Flytrap faces three primary threats: (1) increasing habitat loss due to residential and commercial development, (2) habitat degradation as a result of fire suppression, including direct impacts from activities such as installing firebreaks through flytrap habitat, and (3) poaching/harvesting of wild individuals. For this range-restricted species, habitat loss and degradation are key drivers to its decline, especially in the inner coastal plain where most populations have been entirely lost. Populations persisting in the outer coastal plain and Sandhills are concentrated in only a half-dozen large protected areas that are being actively managed with prescribed fire; these are the most viable populations. Poaching threats remain important, especially in protected areas where development and fire suppression threats have been addressed.

What's so special about Venus Flytrap?

​The Venus Flytrap (scientific name Dionaea muscipula) is one of the most widely recognized plants on Earth due to its unique snap traps. The “trap” located at the tip of the leaf is about an inch across and consists of two hinged lobes. Each lobe has 3 to 5 hair-like projections that when tickled, cause the two lobes to snap shut, trapping insects. The trap will only snap shut if the hairs are touched 2 or more times within 20 seconds so the plant does not waste energy on false alarms (at higher temperatures, it often only takes a single touch to trip the trap). Bristles along the edge of each lobe interlock when the trap is closed so prey can’t escape.

Why do Venus Flytraps eat insects?

Like most green plants, the Venus Flytrap’s main source of energy is from photosynthesis, but the digestion of trapped insects--beetles, spiders, ants--provides nutrients like nitrogen that are limited in the acidic, nutrient-poor, wet sandy soils where these plants grow.

What's behind that name?

The Venus Flytrap was introduced to western science in 1759 by North Carolina's Colonial Governor Arthur Dobbs, who wrote in his diary, “The greatest wonder of the vegetable kingdom is a very curious unknown species. Upon touching the leaves, they instantly close like a spring trap. It bears a white flower. To this surprising plant, I have given the name Fly Trap.”

The scientific name Dionaea refers to the Greek goddess Aphrodite and muscipula means fly or mouse trap. By the mid-1850s, Carolina’s Venus Flytrap was known worldwide.

Where to see Venus Flytrap

Find more sources of information about Venus Flytrap on our RESOURCES page.
Learn about current research that seeks answers to questions we still have about this plant HERE.